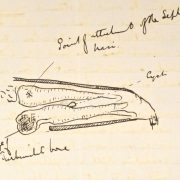 oats in a fluid & macerated condition. The fluid being like milk & only slightly acid. This is very remarkable & most marked. The acid of the stomach was not Hydrochloric. The oats had passed as far as the ileum & had entered the Caecum and also the 1st portion of the colon, though not from a greater distance than one foot of the latter gut. This is a remarkable & interesting fact as this mule not having received oats for days had none inside him excepting what was given at 6 am. The duodenum contained macerated oats in a pultaceous yellow mass, further on the grains of oats could be more distinctly defined floating in a yellow viscial[?] liquid. Further on, in an apparently more finely concentrated granular condition still in a yellow fluid, this granular condition I take to be pht acid albumin, & on arriving at the ileum pasty & sticking to the gut. The latter not being so contracted as usual. The reaction throughout was neutral excepting at the ileum where it was faintly alkaline. I cannot quite remember the reaction of the duodenum but I fancy faintly acid. I am not clear on the point as my mind is confused though a previous day’s post mortem (Segt Miles says it was neutral.) The Caecum contained a dark green fluid in which floated oats & grass. The latter sank, reaction faintly alkaline. The deep green colour was peculiar & produced by grass as I may say this animal had recd no corn for days & lived on grass in the paddock. The final colon contained a little corn for about a foot or so the ingesta was semi solid & also the dark

The 1 & 2 colon was alive with small thread like parasites. In this feeding experiment we have the undoubted fact that in 6 hours corn has entered the 1st colon.

Exam of head. The frontal & max sinuses were filled with a dense gelatinous membrane which divided it into septa each containing a mucous looking pus. The inferior turbinated bone bulged considerably on the nasal passage at its posterior part & was ossified. I cannot quite understand the cause of this, the septum nasi was adhered to the superior turbinated bones on both sides

There was considerable thickening of bone at the sent from operation.

My post mortem experience leads me to believe that the thorough scraping out of the sinus & removal of periosteum would be the only likely method of cure in a similar case. This horse mule had double nasal gleet, the off side did well the near side was trephined several times but the membranes always formed[.] the case lasted 12 months.

The blood from this mule formed a firm clot in six minutes. The mule was pig fat on grass & must have had a large digestive co-efficient.

[[3]]
[Sketch of sinus cavity with annotations:

Point of attachment of the septum nasi

The communication between the sinus & nasal cavity was very large & inside the nostril at this part was a cyst containing pus & serum or thick serum like material, the walls of the cyst being formed of schneiderian membrane. The turbinated bone at the bulge was ossified. 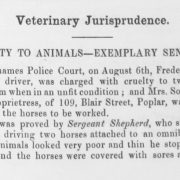