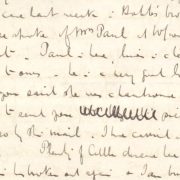 [[1]] They told me some curious stories last night of life in Pretoria before we arrived. They had the life of the devil, there were all sorts of secret societies formed for the purpose of finding out the political opinions of people even the women formed a detective society & gave information to the State. They related then an account of the meeting held by the Amazons of Pretoria before we came in. The women met & demanded to be armed the meeting was at 4pm  & most of the ladies were in evening dress & generally very low. They would allow no men to be present as they laughed at them, Mrs Meyer[2] & Mrs Botha[3] (pronounced Bota) were present

They tell me Mrs [1 word illeg] Meyer is a very disappointed woman, she is most ambitious & hoped one day to be Mrs President when she openly gave out she would [1 word struck through, illeg.] lead the fashion & show them how to dress. Poor thing! so long as we are here (& we have come to stay) she will take a back seat. It is rather curious how the extremes meet, the other day a hospital was opened the Palace of Justice having been converted into one. Lord R[4] opened it & signed his name in the book, then Lady R (who is here) did the same, then Mrs Botha & then Mrs Meyer. At the same moment firing was going on

in[sic] that engagement Connelly of the Greys[5] & Pilkington of the Royals[6] were killed. I knew them both. Pilkington had been at my Field hospital only a day or two before for over a week looking after men. He had been captured in Natal & had been a prisoner for months. He reminded me that we watched together the first days fight on Spion Kop or where he lent me his telescope. Poor fellow he was very young barely 20 I should think. I told you of a similar case last week in Hobb’s brother.

You once spoke of Mrs Paul at W/wich[7] being well turned out. Paul is here, lives in a tent in the next compound to ours — he is a very good looking man & I think you said she was a handsome woman.

I forgot to send you [words redacted] picture, but I will do by this mail. I have carried it for you for weeks. Plenty of Cattle disease here. Pleuro-pneumonia has broken out again & I am busy inoculating some 4000 cattle. I hope they will do well. I have met the V.S to the Transvaal Govt. but I think I told you of this in my last[8]. He is a Swiss we have engaged him on the Police[?] & I think he will be true to him self[sic]. He is a very decent fellow & a scientist.

[1] Annotation in pencil – possibly added at a later date

[3] Annie Emmett, wife of General Louis Botha (1862-1919), commander-in-chief of the Transvaal Boers, and leader of a guerrilla campaign against British forces

[4] Lord Roberts {1832-1914), Field Marshal and overall commander of the British forces in the Second Boer War

[7] Woolwich, where the Royal Artillery Barracks were located. 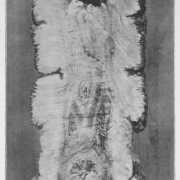