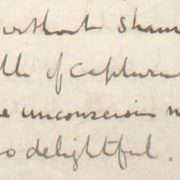 [[1]] I see Churchill is home, & other correspondents & men I knew out here. I cannot tell you how envious it makes one. Watson Cheyne[1] the surgeon practically lived in  our mess at Pretoria & by this time he has been home some weeks & living on the fat of the land. What would I not give to exchange places with him for a week. In one of the service papers I saw a letter from an old officer complaining that men in rude health were walking about London playing polo etc after being invalided from S. Africa & suggesting that they had better return & give others an opportunity for a change who had never missed a day’s duty. I quite agree with the old gentleman

I have bought a soldiers suit of Khaki serge from the Ordnance price 18/- most excellent. Hallet & I are putting on it a roll collar, outside pockets & cuffs to make it look an officers serge. At first he said it could not be done, but having got a bit of serge I cut out paper patterns finally got it right & to day[sic] we have put the roll collar on & it looks ripping, to morrow[sic] the pockets go on. I told Hallet to bring out his sewing

[[2]] machine & to my surprise he said Oh it wont[sic]  work. I told him I would soon make it. He then produced a thing which must have come out of the Ark, no handle & delightfully rusty. I had no idea he possessed a machine, so he must have thought me the very devil incarnate to have divined one was in his possession. It is a bit of loot he found in this house.

Well he worked for the best part of a week to get the thing going & failed. With great luck I had it going in less than ten minutes after starting with it, I fancy he thinks I am “terrible clever”. Well about the jacket, you shall see what excellent pockets & collar I have cut. I always told you that if I had a pattern I could make a dress. I am now positive of it. I laboured in paper until I got the thing right & then cut out my stuff. Its great luck getting the serge to make the Collar etc with, & this serge has a history. My clerk ‘save the mark’ the ‘Orish’[sic] gentleman who poses as my clerk but does nothing more clerkly than grease

[[3]] my boots & go to the telegraph office with messages was a short time ago taken prisoner with a convoy. The Boers robbed the convoy & carted the prisoners over the Free State, but before leaving the waggon[sic] which contained clothing my faithful boot greaser helped himself to a bale of serge cloth the sort of useful thing a soldier loots & having carried it for scores of miles  & subsequently being recaptured by us plus the serge, he gave it to another man for a pillow — Hearing I wanted serge he went for the pillow & I have a lovely bale of the stuff the exact colour of my coat & overalls. I am also using it as a pillow, for I have no intention of parting with that serge. Oh my boot greaser is a ripper I think I told you he was copying a report for me in which I used the expression [“]We cannot make Bricks without straw[“]. He copied it “We cannot make drinks without shame”. I think this is quite capable of capturing the historic biscuit! Its the unconscious nature of Irish humour which is so delightful.

[[4]] 30 Augst. Well it poured with rain for hours. This morning is fine, but the hospital is a sight, tents blown down mud over a foot in thickness & everything as miserable as possible the — dry bed of the river I cross every day is a rushing torrent — I find I cant cross water moving quickly across one’s front without getting giddy — I could feel my horse going round & round in a circle, the horses in front of me were doing the same & though I did not feel sick in the least I felt very uncomfortable. Had the water been deep it would be very risky.

The rain has washed the railway away in several places & traffic is quite suspended. I have just copied poor D’s letter. I have left out two words for obvious reasons. How strange his last sentence now reads “Farewell — till we meet again”. I met General Sir A. Hunter[2] to night[sic], I went there to have some tea with King. He is a man of very few words. Absurdly young looking for a Lt General. Looking through the illustrated papers he said as he came to the Adverts “When this campaign is over I think I’ll stand myself a dressing bag”. Strange a man in his position & a bachelor not having one!

[1] Sir William Watson Cheyne, 1st Baronet, (1852 –1932) was a Scottish surgeon and bacteriologist, served during the Boer War as a consulting surgeon for the British military in South Africa from 1900 to 1901.

[2] General Sir Archibald Hunter, GCB, GCVO, DSO, TD (1856 – 1936) was a senior officer in the British Army who distinguished himself during the Boer War 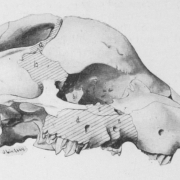