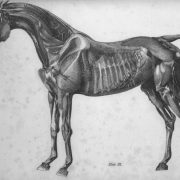 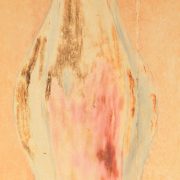 Click here for full transcript of Case Notes for Horse 23

Sprain to sesamoid[sic] sheath of off hind limb. Extreme lameness and pain. Foment and give Aloes ℨV  – Place in slings

Not a big better and an abcess[sic] has formed at the fetlock, discharging a little thin pus. Fomentations is the only thing which gives relief the animal is losing flesh and considering the length of time he has been ill it is a wonder he has not died of irritative fever

The animal do not make the least improvement he is constantly holding the limb in the air. The sheath is tense, thickened, hot, painful and another abcess[sic] has formed on the outside of the fetlock, also discharging a little thin pus & synovia.

I cannot make out the case, it is wonderful that an animal should for so many weeks suffer such acute pain with no sign of abatement, I believe the sesamoid sheath is ruptured and I will try the counter irritating effect of a blister – Put back in slings and blister the part. The suffering is telling

upon the poor animal who is daily loosing flesh though on full feed, if he were not a young horse I would certainly apply for his destruction.

The blister has acted as yet with no good effect

Still as painful as ever, the limb is held up all day

I think there is a little improvement, he bears more weight on it and is looking better.

The brush[?] is enormously distended, tense & painful – He has been now in slings a month

An abcess[sic] which does not communicate with the brush has formed and burst on the external Surface of the bursa or is about the size of a Rupee. Dress all with dry bran. Stands much better. I am not likely to remain in charge much longer or I would certainly fine the joint as soon as this abcess[sic] has healed.

When I saw this animal to day he was going sound. The sheath fetlock is much enlarged but the [iron] should put him right. He is quite fat & plump now.

saw him again to day, not lame but has small abscess forming occasionally[?] around the pastern. Crow has fired him again & he still remains sound.

Click here for full transcript of Case Notes for Horse 111

Wound incised off fore above Fetlock caused while jumping, the perforatus is nearly divided the synovial sac opened dress with Carbolized Bran & syringe every morning for an hour with Carbolized Water.

An abscess has formed in the heel owing to suppuration within the bursa. Continue treatment.

Wound healed the thickening is as great as ever would blister but consider it useless, what makes matters worse is the irritable condition of the patient who won’t go in slings & won’t lie quietly but continues hopping round the stall with a high heeled shoe on remove the latter & bring up for casting.

Injury to tendon caused by an over reach. Horse belonged  to 2/1 RA no 111

The perforatus was thickened which extended around the joint. The perforatus, cut through, infected. The perforans infected, small portion of example is parts showing that it had become adherent. 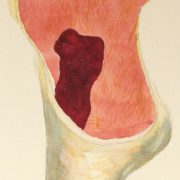 D 47 12RL On opening the muscles there was nothing to be seen but that the muscles were paler than usual & on opening the capsule of the joint the synovia was in excess & deeply died[sic] with blood, the synovial membrane was thicker than usual but not inflamed. The articular cartilage rather swollen and soft around the circumference of the humerus, but in no wise[?] inflamed or ulcerated, towards the ant: internal part of the articular surface of the scapular there was a slight abrasion, notched like of its circumference, it was smaller than a pea, but the cartilage was swollen & the bone was distinctly felt bare[?] in its centre, it was not inflamed or was there any sign of ulceration. The flexor Brachii[?] at its origin seemed injected & there was a bruise the size of a bean just below its tendon on the outside. The sub scapularis muscle had suffered, it presented the appearance of being severely bruised, ecchymosed through half its length and entire thickness. I could detect no rupture of its fibres, & its insertion was intact. The humerus & Scapular through half their length were congested, the periostium thickened and easily removed leaving the injected bone beneath. More particularly was this the case in certain parts such as near the insertion of the sub scapularis but the outside of the joint had shared in this apparently inflamed process but not to the same extent. There was osteitis of Humerus – see sketch

The history of the case of which the above is the post mortem is that on March 1st this horse collided during competition with a much heavier one, was struck on the near shoulder & knocked over. She fell on her side, but got up & walked to the infirmary with the leg dangling about like a broken one, thrown across the front of its fellow, the elbow being turned out, was placed in slings. When again examined next day when made to move the whole shoulder seemed to come out laterally the elbow turned out & the giving was so great that the animal leant entirely over to that side. I believe the 4th Condyle of humerus is knocked off & with it the attch of Portea Spinatus

March 6 – Blistered and consulted with Brown[?] & he thinks a fracture.

I divided this muscle in a dead limb and produced the deformity.

March 20 –  No better. Shoulder still out or seems to be every time he[sic] moves he can stand fair on limb, but can put no weight, can even make with, has a great knack of crossing his legs both front and rear Placed in slings and tied in. Pitch plaster &c. Placed the off fore on top of rear foot. Kicks the ground constantly. I think[?] from blister – but he does it day and night. Cause on P.M.E The lumbricoides

April 7 – Found with tetanus. Owing I think from chafes in slings.

Copied from the Record Case Book

This horse has been in the sick lines since March 1st with what I considered to be a fracture of the point of shoulders (near) there being extreme lameness & apparently dislocation. He was placed in slings. Lately he was found to be rather chafed round the chest as he was very uneasy and always kicking. This latter was not vice but was too continuous for such a long period not to attract attention

On visiting him this morning he was slightly blowing but feeding. On seeing him ¾ of an hour

later my suspicions were confirmed & I immediately administered, or rather tried to, a purgative. He lost nearly the whole dose. I then gave Carum[?] Indic: Ʒij with Heum Crosonis mxx in a ball. I managed to get this down. Removed to a loose box, & kept perfectly quite[sic], pulse normal, Temp 100o.

6.30pm Worse, the disease at its full height

At 9 am dropped down & died asphyxiated. [Annotated ‘8th’]

Autopsy. All viscera normal, but the stomach & duodenum contained I should say 500 Ascarides many of them over a foot in length, they nearly filled the duodenum

Remarks. Was it the chafe or Ascarides caused the tetanus. My view of the matter is that the chafe produced the mischief. The presence of this enormous number of parasites undoubtedly produced the great nuisance[?] which shewed itself in the continuous kicking there was no fracture of the shoulder, but ordeals[?] of humerus & severe bruising of Sub scapularis muscle

A section of the head of the humerus of D47. The medulla was exactly the above colour & the cancellous tissue was just as represented. I made no section of the scapular[sic] but I am sure it was the same.

N fore limb of I/3 horse injured at Kelbol[?]

The limb was an enormous size around the fetlock it was 17” in circumference & around the pastern 12”. There was the mark of an abscess on the outside and centre just above the fetlock. On removing the skin which was thick there was found enormous subcutaneous effusion of liquid and solid serum this was about 1 ½ “ to 2” in thickness. The superficial lymphatics were enlarged and contained coagulated lymph & a superficial abscess on front of fetlock After all this was cleaned away the Ext Pad just above the fetlock was directed downward and found to be slightly adherent to the bone & cut gently[?] the bone could also be felt nodular at this plane[.] On removing it on the joint the Capular opened was found to contain bloody muco-pus with air bubbles. The joint was laid completely open by dividing the later sesamoidal[?] lip and the synovial membrane was found scarlet and maroon extensive dislocation[?] of cartilage in several places varying from a about the size of sixpence to a pin point these were scarlet the cartilage in other places being partly absorbed the inflamed bone shown through black. There was extensive porcellaneous deposits in the joint no synovia. Partial dislocation of the met: found on the suffraginous sesamoid sheath the tendon was softened & adherent to each other & also to the fibro cartilage of sesamoids.