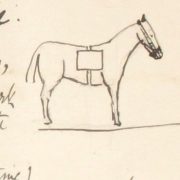 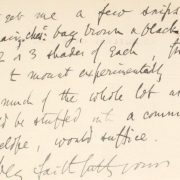 You are most obliging & helpful. Let me suggest in addition (if not too late) a white streak down the line of the shoulder & possibly elsewhere.

I am making a little, optical instrument that promises to act very well, to standardise colour. Could you manage conveniently

to get me a few snips of hair, ches:t bay, brown & black, and of 2 or 3 shades of each, for me to mount experimentally[.] As much of the whole lot as could be stuffed into a common envelope, would suffice. 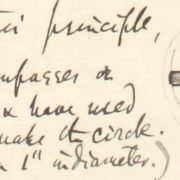 Last night on returning from a few days in the country, I found your most welcome photographs; the card about A reached me this morning.

more trustworthy when taken as the perspective projection

[sketch of horse and camera positions]

of the spots on a vertical plane touching the horses side; that at is as mn (not MN). What is wanted is an horizontal projection of those

points viz μ, v. The small correction necessary to find these is easily to be obtained from the data h, k, Mμ, Nv.

h & k might be recorded by the photographer (a rough approximation sufficing) and Mμ Nv might be guessed for the particular horse after having been measured for two or three types of horses[.] The correction wd be very small never I should think exceeding 1 inch, except in the height of withers & elsewhere along the spine of the back[.]

the values of mn & your

measures of MN are given below

[table of data including mn (from photo) and MN (from measures)]

I took photos (not yet developed) of 2 horses in the country but foolishly did not measure between the spots, my object being to practice the technique of manipulation. It was an opportunity lost.

When I have worked at these, I should like to consult you as

to the best way of getting numerous photos with measures of horses; and of determining what points to select for measures.

Your gummed discs are beautifully clear. I am inclined to lithograph & cut out discs on this principle,

(I have no compasses or scale at hand, & have used a shilling to make the circle. It shd have been 1” in diameter.). or else to stencil them. Pray accept my heartiest thanks.

As regards the whistles I enclose one for you to keep. You will probably find it to work best when the piston is greased.

There is so much difficulty in determining for each individual whistle, the relation between the depth & the note, that I would suggest your discarding the question altogether & in its place to find the depth that cats can just hear & some few children also. If in a more intelligible measure than

no of vibrations. Shaw’s method of doing this was by the method of interference between the sound wave, as it travelled towards a screen, and its echo as it travelled back. By moving the jet of a sensitive flame to and fro, the nodes of quiescence were easily found & the distance between 2 adjacent nodes was quickly found, whence the no of vibrations per sec: was of course found at once.

The sound does not travel round them freely, as it does with ordinary notes. I tried all the beasts in the zoo with a whistle at the end of a walking stick. An india rubber ball was squeezed in the hand, and it

expelled air that passed through a thin tube to the whistle, which gave a tiny squeak. The big carnivores hated it. Some human persons do so also. It gives to them a strange dizzy sensation, that is not sound, but is conveyed by the ear in a different form to the brain.