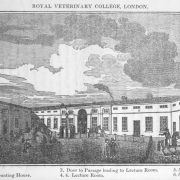 Terms of Use
This material has been identified as being free of known restrictions under copyright law, including all related and neighbouring rights, and is being made available under the Creative Commons, Public Domain Mark.
Tags for this work
artwork, bird, Bracy Clark, cat, cattle, digestive system, dog, Edward Coleman, elephant, eye, farriery, foot, hoof, horse racing, hunting, ostrich, parasite, pharmaceuticals, Royal Veterinary College, sheep
Suggest a tag 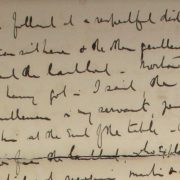 [[1]] I have just arrived here, the other side of Cape Colony (just above East London) after travelling incessantly since I last wrote to you viz 19 Feb — I had intended to fully describe my journey, but the fact that the [1 word struck through, illeg.] mail goes to morrow[sic] & I only have a short time to night[sic] to write it [1 word struck through, illeg.] precludes all notion of giving you a detailed account of all my adventures – I just did a long train journey through the heart of south africa[sic] & a God forsaken place it is. Nothing but desert nothing but stones, & hills, after Natal it was positively [illeg.] dreadful & reminded one more of the Soudan[Sudan] than anything sl else. Where they have water [1 word struck through, illeg.] town & veritable oasis is constructed & here everything is green fruit abundant & a perfect garden of Eden, but the line of demarcation between  that & the desert is as absolute as anything can be for two nights & a day & a quarter did I do this scenery further towards Craddock, which was my objective, matters improved a little & here ostrich farming help[s] to relieve the monotony of the view, those dear children would have liked to see those beautiful birds running about wild, lovely plumage I must try & buy some for you, but they are very expensive.

At last Craddock was reached. It is a small town very Dutch & therefore very disloyal I found 2 companies of the Sherwood Foresters[1] here & they made me most comfortable, the Boers were expected the day before I arrived, but had not turned

[[2]] turned[sic] up. They were rather nervous about their appearance as it was impossible to hold the place with a handful of men & nearly everybody in the place was a Boer sympathiser they openly boasted of having 10,000 men ready to rise, but if they could have produced 1000 I should have been surprised. I  remained at Craddock a day & a half & then owing to the Boers being in possession of the northern part of the line I had to drive from Craddock to Queenstown over 90 miles in a Cape Cart. I took Morton & was glad of it but what a shaking up we got for 50 miles

The road was perfect h– it is impossible to describe up & down hill, in ruts over stones, boulders & rocks, through the dry bed of rivers, through streams, down places that made you gasp as you looked at them & this went on from 10 one morning until 2 am next day, by that time we had only done 53 miles, but I am anticipating.

It was a Dutchman who drove us & of course a Boer sympathiser. I had my revolver & Morton Carbine & should have blown out his brains on the spot if he had tried his games on, I was suspicious of him for a long time as he kept looking out right & left for miles, bear in mind we were within 20 miles of the Boers a distance easily covered by them on two horses. As night came on & we got no nearer our destination I still more sus-pected[sic] my man at last it got quite dark the thundereder  rolled & a heavy storm came on, it was so dark that I could not see Morton in front of me not two feet away. We got out tried to find the road on our with our hands but no use. We could hear the noise from a waggon[sic] in front & a friendly flash

[[3]] of lightning showed a bullock waggon[sic] just ahead of us. The driver confessed he could not see the road & asked Morton if he could. Well he & the driver crawled under the waggon[sic] for protection. I rolled up in my waterproof bag on the seat of the two wheeled cart hulled up like a [illeg.], the wind howled, the rain came down in a perfect deluge & this lasted for four hours, a pale moon then rose & we continued on our way & finally reached Tarkastad a very Dutch centre seething with disloyalty. After much difficulty we woke up a man in the hotel & demanded stable & bed. His idea was we would all sleep together so he took us to a three bedded room but I drew the line at that. My first experience was finding seven B flats[?][2] stuck in the candle just after they had been impaled with a pin! I at once scratched myself back & front, made a search of the bed & walls, the latter bore full external evidence of much slaughter, this was enough for Morton he elected to sleep in the cart outside. I lay as I was gingerly on the bed candle burning until daylight & I think this kept the enemy away for I was not troubled during the night.

I found the house was kept by a Polish Jew but all S. African hotels are the same, even the one in Cape Town where I lived. One amusing scene occurred earlier in the day. We stopped at a wayside home for tea, it was a shanty of the first water kept by a Dutchman who tried to appear very loyal[,] tea was amassed & I had previously asked Morton whether he would like some & he replied in the affirmative. [“]This way gentlemen[“] said the landlord leading the way to the tea room.

[[4]] Morton followed at a respectful distance — [“]You can sit here & the other gentleman there[“] said the landlord. Morton not yet hearing got in I said, [“]the other gentleman is my servant, you can put him at the end of the table[“]. Profuse apologies from the landlord, who explained that he did not recognise master & servant & otherwise gave himself away, however he wound up by calling out, [“]Come on Mr. Morton & sit here[“]. Cant’[sic] you imagine the colours of Morton’s face!

In this blessed country every hotel Keeper[sic] his wife, children , etc shake hands with you including also Morton who distinguished appearance gains him great attention.

Well, our second days journey was 42 miles, better going but rained heavily passed through flights of locusts which resembled a huge dust storm, never saw anything like it, saw buck had a shot & nearly got it, equids [1 line redacted] & other beasts of sorts) & finally got to Queens town[sic] at 4 OClock[sic]. The place was in great rejoicing they had the news that Cronje[3] had surrendered & that Ladysmith had been relieved, the loyal inhabitants had hung out flags[,] bicycles with flags & other ornaments invaded the streets & every evidence of rejoicing on the part of the loyal inhabitants but they are few, very few. all[sic] wear a festoon of ribbons on the hat red white & blue, all who dont’[sic] & they are numerous are ached[?].

I made up my mind not to stay in a S.A hotel again if I could help it, so worked there show to live in the station & I am now put in a post office railway van, with a plank up it to walk

[1] Nottinghamshire and Derbyshire Regiment of the British Army